There are two ways to get up Table Mountain, hike or take a the cable car. Guess which option we took. Getting up very early for a long day of sightseeing we took the 9am tourist bus direct to the cable car base station. Today for the first time in a week we’ve been told, the mountain had no cloud cover, as a result the queue had formed by the time we got up.

It takes 5 minutes to rise up to the submit, some 1 km high. The cars themselves can carry 65 people each and have a rotating floor inside so everyone can take in the breathtaking views.

Millions of years ago cape town was underwater, with table mountain being the only bit of land, acting as an island. The views from the top are incredible and highly recommended on a clear day. 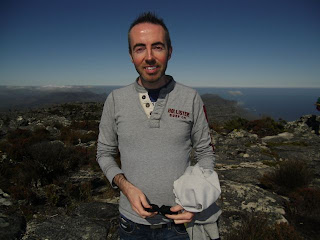 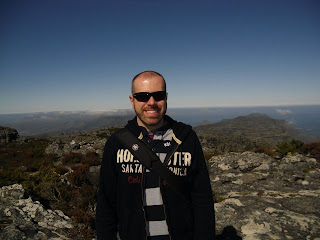 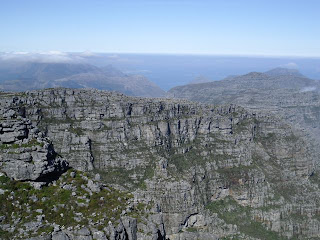 From the mountain we descended down to connect with the tourist bus onward to the V&A harbourfront. We booked tickets over a month ahead for the Robben Island tour as it sells out well in advance. Robben Island is located some 11km out into the sea, made famous as the prison which housed Nelson Mandela. The boat ride out wasn’t too pleasant. No seats as such, just boards or standing room and the ocean crossing is far from smooth. Definitely don’t take this crossing on a full stomach.


It took 45 minutes to get to the Island where we were divided into groups of 50, boarded a bus and taken on a 45 minute tour of the Island. Our guide was a political activist who was well traveled and knowledgeable about world politics including Irish. From there we ventured into the prison itself where an ex prisoner during the apartheid talked about how they were convicted and treated. Another 45 minute tour followed, finally ended in a viewing of Nelsons Jail Cell.


It was a very long afternoon, taking over 4 hours to get to Robben Island, tour and get back. All we really wanted to see was Nelsons Cell, which lasted a whole 10 seconds. Robben Island is a nice to see, but not wholly recommended. The boat crossing back to the mainland was rough, but we were treated to a beautiful sunset over the Atlantic ocean.
That evening we ventured out to an american styled dinner called beefcakes which hosts a weekly bitchy bingo show. We arrived half way into it, but play the final two games. Thankfully the venue was only a 5 minute walk from the apartment as we didn’t fancy roaming too far into the city at night.

Like most things here, the show was over early, by 10pm, and we were home to prepare for the return flight to Dubai tomorrow.
Posted by Unknown at 11:30